Home How to Get Involved Diaspora

Help Compatriots Prepare for the Worst

If ever there was a life-saving collaboration waiting to happen it is the potential synergy of diasporas, providers, and donors all watching as atrocities start to unfold. Yet though they share the same ultimate goals, seldom are they adequately synced in timing or joined in purpose. The Center’s role in this is to identify, connect, and support these three sets of actors. The overview below is further detailed in the Center’s document, Diasporas: The Missing Link.

Diaspora:  No one cares more about civilians in harm’s way than the émigré, refugee and asylee populations who have left their at-risk communities behind. And no one responds earlier. Many who face conflict come to depend on diaspora monies for their survival. These remittances are countercyclical: they increase while investment and development aid decline in the face of violence, and they often outstrip those official sources. Yet as violence intensifies, individual (person-to-person) remittances often face obstacles which might well have been preventable with more planning. Meanwhile, collective remittances for community self-help efforts too often start from scratch and rely on ad hoc volunteerism and untested aid structures—which also might have been avoidable with planning.

Providers:  Aid service providers—indigenous and international—are often the best platform available on the ground for supporting local capacity to survive violence. Others, focused on human rights, good governance, rule of law, peace building, conflict prevention, early warning, accompaniment, diplomacy, peacekeeping, or security sector reform are seldom as well situated or oriented to engage locals for this purpose. Yet even aid service providers may respond in belated and ad hoc ways. They still lack a framework for understanding local self-protection and bolstering it. And they have not been incentivized with donor flexibility and financing to do so.

Donors:  Donors have considerable if not determinative influence over prospects for supporting civilian self-protection. That influence lies not just in their life-saving resources but also their potential to incentivize providers toward specific strategies. Yet they have neglected the strategy of conflict preparedness (as distinct from prevention). They are also far more cautious and slower to mobilize resources for those facing threats than are the diasporas.

In the matter of helping local populations prepare for the worst, diaspora and proven providers can each put comparative advantages to work. Yet providers as well as donors “may overlook, be reluctant, or find it very difficult to work with” the less formal, less strategic, more volunteer-driven approaches which diaspora often (at least initially) adopt.

For these reasons, the Center choses to undertake a “brokering” role to foster collaboration. “Collective remittances for community projects need careful organization from both sending and receiving sides. Networks of interested parties may exist in the communities of senders and recipients but these networks must be identified and connected.” Under this proposition, money does not pass through the Center but rather moves between the parties that agree to “three-party pacts”. The potential benefits to each as they try to help civilians in harm’s way are enormous. 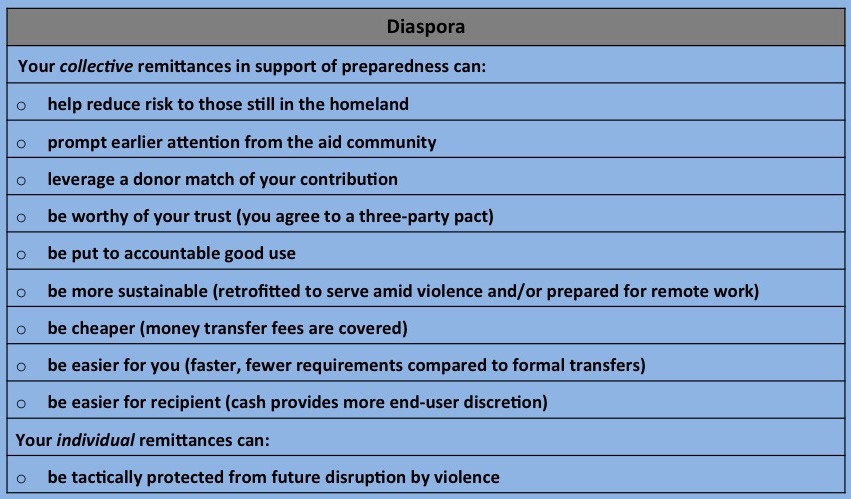 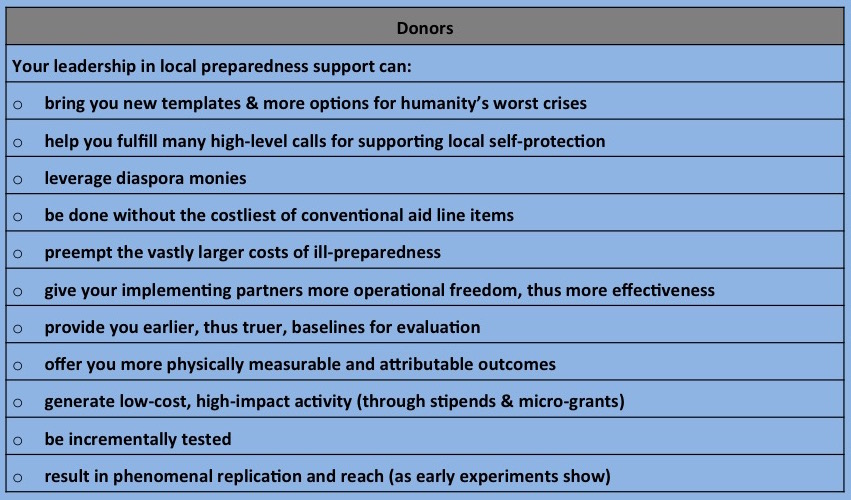 In order to encourage these actors to enter “three-party pacts” for getting combined funds to reliable self-protection programming on the ground, the Center will undertake the following broker and guidance functions.

Identify and connect partners for collaboration

Note: The assessment work cited below is desktop research and does not aim to produce any certification or recommendation. Rather, its intent is to provide summary reviews of diasporas, providers, and donors with enough of a documented track record and a stated willingness to consider collaboration for others to carry forward.

1. Diaspora. The Center will develop a registry of select diaspora groups. It will also develop an e-roster of deployable talent within diaspora groups. “Diaspora” can include organized groups residing in refugee camps or settled in countries further abroad. The Center will prioritize research on transnational populations from countries watchlisted by early warning organizations as being at the greatest risk.

Research will focus on the more prominent groups established to further funding, skill transfer, advocacy, or other nonviolent support for their homeland. It will result in summary reviews of the motivations, demographics and track record of that each given group. The Center will then contact the best-documented and established of these groups. It will learn from each which collective-giving appoaches (community-based? unearmarked tithing?) they prefer and which providers on the ground they trust. It will also determine their level of interest in fortifying current individual (person-to-person) remittance giving approaches.

2. Providers. The Center will map aid service providers in the conflict-affected country. The most active local NGOs and community-based providers referenced by diaspora groups will be profiled using aid industry “partner assessment” templates which have the best balance of rigor and flexibility. International providers in situ will be assessed using third party reviews of their performance as well as evidence of actual equity in local partnerships. The Center will then contact the providers with the most compelling summary reviews. It will learn from each how receptive to and capable of supporting local preparedness they feel they would be if the resources and guidance were made available.

3. Donors. The Center will map donors concerned with the conflict-affected country. Donors can include those funding development aid, humanitarian aid, and any technical sector therein (since all these spheres of work have a vested interest in being prepared for unstoppable violence). The research will seek out, and do summary reviews of, donors with a proven record of strategic foreward thinking, innovation, flexibility, and deference to locally driven action. The Center will then contact select donors and learn from each how receptive they would be to matching the contributions of reputable diaspora in funding competent providers to help brace civilians in harm’s way.

Support the collaboration with guidance

The Center will provide guidance that providers and at-risk civilians together can adapt to:

1. Shock-proof remittances. Certain preemptive measures can mitigate the disruption typically caused by violence to remittances. This applies both to collective and individual remittances.

2. Spur local preparedness. Beyond the supportable preparatory steps already being attempted by locals in a given crisis, there are also many possibly useful lessons from other conflicts on which the Center has information and guidance. Most are a matter of messaging and mobilization (which providers are well-suited to offer). And some are lend themselves to micro-granting for exponential results.